Those that follow me may know that I was raised Mormon but no longer practice in the religion. As such, I participate in quite a few online forums with other people in various places of the Mormon spectrum. In these forums, private text messages or social media posts from believing and orthodox family or friends are often shared as a way to vent frustration. Most of these forums that I participate in are private, but a few are public. Nevertheless, I'm always shocked at how little the person sharing these things does to redact the text in order to protect the privacy of the other party. The most common situation is that a name is redacted but a profile picture is not. Occasionally, nothing will be redacted at all. It is rare that I see a post that meets what I personally consider as acceptable. I thought I'd take the time to share that personal criteria in hopes that it can catch on and make the internet a safe place for everyone. After all, I have some experience in doxxing.

Why does it matter?

You may be thinking why should you care. The answer is, for a lot of reasons. While your intentions in sharing may not be malicious, but rather therapeutic or cautionary, there is always the risk that the comments shared will be triggering to someone in your audience. If there is information that can be used to potentially identify this person, it could be maliciously exploited to find further information. A good example is in the aftermath of Charlottesville, many of the white supremacists were identified via the photography at the event. Subsequently others around the Internet were able to track down many of their employers, contacted them, and advocated for the person's termination. Now, I'm not arguing that this situation is or isn't justifiable, but simply use it to illustrate the possibilities. If your friend makes one ignorant statement that you can get passed but someone else can't, and you don't redact their information sufficiently, that person could get fired or otherwise have their life ruined. This is a very important topic. For more information, I suggest reading the Wikipedia entry on doxxing. Please also note my disclaimer in the footnotes here.

The most common form of sharing these posts I have seen is to post screenshots. It is typically of something that the person sharing completely disagrees with or finds offensive. In order for it to be acceptable to share, I believe the screenshot must have the following things redacted completely:

To illustrate, I will use screenshots of a couple recent public Facebook posts I have made. For the sake of demonstration, imagine these are being posted to a private forum by a friend of mine.

The example below is a total fail because absolutely nothing is redacted. This should almost never happen. 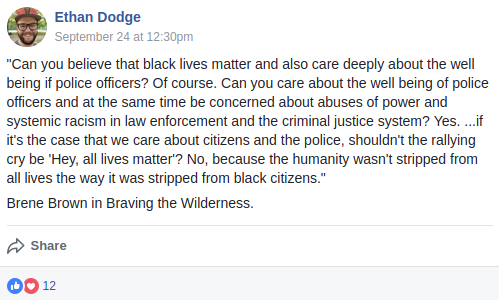 The next example is only slightly better because of the redacted name. However, you'll notice my profile picture is still exposed. This is still very identifying, especially because it is so close up. 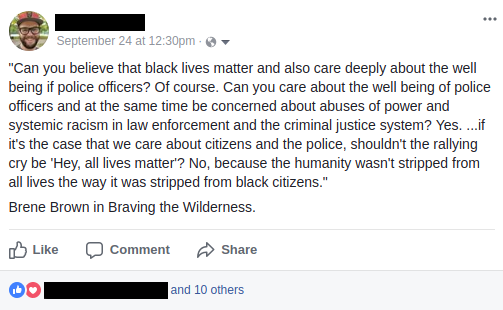 The only difference between this example and the previous is that my eyes are redacted. This isn't much different because there are still other identifying features in my profile pic such as my hat, beard, and smile. Somebody that was friends with me on Facebook could easily identify me. I know this for a fact because this exact scenario happened to me personally. 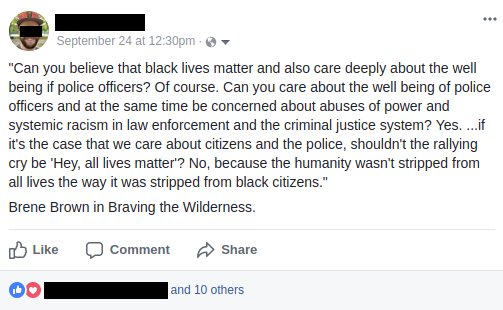 The below example is the only acceptable way to redact a public social media post and reasonably protect the anonymity and privacy of the person involved. Notice that the exposed names of those that have liked or otherwise reacted to the post have also been redacted. This is important as well, especially if the post is particularly controversial and could potentially spread to outside the group for which it was originally intended. 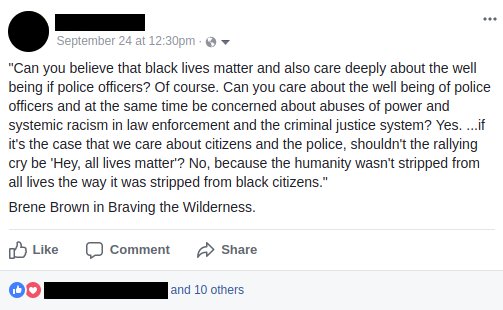 Also note, that if the post had contained my location, address, phone number, or anything else potentially identifying, that should also be redacted.

Lastly, if the comments of a post are shared, apply the same principles outlined above to the comments section as well. 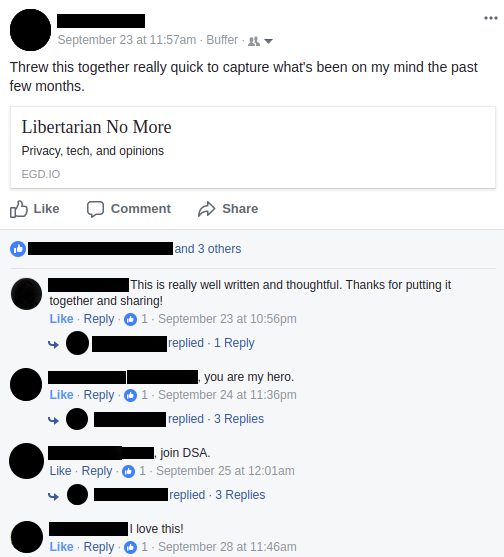 *Note: This post contains a link to my personal blog. For the sake of demonstration, assume that it's to a normal media outlet. Otherwise, it is very identifying.

Text and other private messages

Another fairly popular thing to share is Facebook and Twitter direct messages or text messages. Often times these are conversations that did not necessarily go the way the person sharing them had expected and the other party probably said some things they regret. In my example, I simply engaged in a generic conversation with one of my Facebook friends. This is the extent to which these conversations should be redacted. 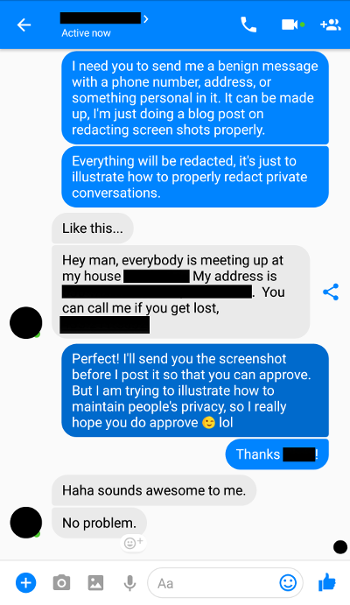 Note the following things that were redacted:

It is crucial to redact all these things in order to protect the person's identity. The exact same rules should be applied to text messages as well.

Often, people will argue that if someone makes a tweet, instagram, of Facebook post public for the whole world to see, that redactions are not needed. I tend to fall into this school of thought, but a valid counter point is the person could later regret the decision and either delete or make the post private. The forum or group in which you are participating may have specific rules around this topic and it is always good to check. One of the forums that I most frequent, the r/exmormon subreddit, does have rules specifically requiring the redaction of all shared social media posts whether public or not. If there are not rules specified, it is a personal decision, but may be better to err on the side of caution and follow the suggestions I outline above.

When making this decision, it is important to consider the scope of what you are sharing. When I say scope I mean it in two specific things: the scope of the privacy settings and the scope of the audience with whom it will be shared. For instance, if you can't believe what your cousin said about Trump's newest executive order in a post only shared with Facebook friends, it is probably ok to screenshot the post and share it with your sibling who is also this cousin's Facebook friend. Or if it's a public tweet of someone you don't know but you're only going to share it with a friend because it supports a point you made in a recent debate, that's also likely fine. But if ever you are explicitly sharing something set to a strict privacy setting with an audience that it obviously was not intended, it is crucial that you follow the suggestions above.

Please note that major media outlets will often share public tweets concerning a certain topic they are writing about, such as Buzzfeed in this hilarious article. In it, they are sharing tweets mostly of students from Brigham Young University the day the school finally allowed caffeinated beverages to be sold on campus. The article embeds the tweets in line with the rest of the text with the article rather than sharing an image of the tweet. This is important, because if the tweets were later deleted or made private, they would not longer appear in the article, thus respecting the user who initially made the comment. There are some instances when this is not necessary, such as when the person is a public figure. That said, think twice before saying something potentially controversial online. The Internet is typically not a forgiving place and not everyone has the same ethics as you or other respectable media organizations.[^1]

Please feel free to share this standard with your online forums and groups. The more these are implemented, the better the Internet will be. Also, don't worry about the redactions looking as clean as my examples here. As long as the sensitive information outlined above is obfuscated, whether by emojis, scribbles, or simply cropping it out, that is what matters. Lastly, please feel free to contact me via email or in the comment section below if you disagree or would like to see something added.

[^1]: The ethics and guidelines for doxxing are not nearly as black and white and clean cut as I make them out to be here. This article should not be used as an ethical guide, but rather be seen as suggestions for protecting the innocent when sharing private conversations outside of their intended audience. The example cited of Charlottesville brings attention to a fascinating ethical and moral debate about whether this sort of vigilante activity is justifiable in certain situations.